Research for Crime Writers: Get it right.


With the advent of television shows like CSI and others, those writing detective novels and crime scene investigators are under increased pressure to write details about crime detection. Which is not to say that CSI depicts in any way the actual steps that go into an investigation. I've been to many seminars put forth by forensic scientists and all roll their eyes at some of the more incredible plot lines in the television show. Likewise, many thrillers stretch the truth and the abilities of the tools out there for crime detection. In fact, there are some tools that simply don't exist, but have become embedded into the collective unconsciousness to such an extent that audiences believe they do.


I ran into this latter problem when writing my first, Running from the Devil. In that novel, my protagonist, Emma Caldridge, is on an airplane that's downed in the Colombian jungle. The paramilitary group that downed the plane arrange to take away the airplane's flight recorder and then bomb the remains, making it difficult for investigators to find the wreckage. Early manuscript readers, though, didn't believe that a plane's wreckage would be difficult to find. All seemed to think that a simple google earth search would reveal its exact location quickly.


Not so. In fact, there are hundreds of airplanes that crash and are never recovered or found. Most are in the Pacific Northwest in America, where the wooded areas and mountainous regions do not lend themselves to easy access, and others in countries with areas like the jungle, where dense foliage block any chance of finding it. In order to deal with the readers' lack of credulity about a fact that was actually true, I wrote in an official of the US organization in charge of finding downed planes and had him recite the actual statistics to an (equally incredulous) main character. Problem solved.


Luckily for most authors, there are now classes and workshops arranged by trusted sources that will teach you all you need to know about crime scene detection and give it to you straight. Not only are these classes informative, but they're a lot of fun. The trick to finding them is to scan the events pages of associations like the International Thriller Writers (ITW) or the museums in your area. I recently received a link from the Natural History Museum in London that is putting on a terrific forensic investigation evening on June 24th. In this evening, one can view a crime scene and learn how to determine date and time of death by insect collection (complete with maggots! Love these creatures and used them in Running from the Devil) as well as tips on how to identify sex and height of skeletal remains. I wish I lived in London. If I did, I'd attend this one for sure.


But wherever you live, if you're writing crime you'll eventually have to learn the basics of crime scene detection. Gruesome as it sounds, it's actually quite interesting.


Whatever you do, try your best to get it right or you will receive emails setting you straight. Just about every writer has had a mistake or two surface in their manuscripts and there are whole websites devoted to the continuity mistakes in movies. I guess that's reassuring. Even Hollywood gets it wrong sometimes.
Posted by Jamie Freveletti at 6:30 AM 21 comments:

I've been attending the BookExpo America here in New York. What a cool convention! It's housed in the Javits center, and filled to the brim with booksellers, readers, writers, and publishing industry executives. I've been attending some of the presentations and will give you a quick overview here. I'm due back there in 20 minutes as I write this, so will update later.

1. Signing lines: long for the "Big Dogs." There are long chutes to aim the hopeful at the right author. Want to get James Patterson's signature? Get a ticket. They were free, but without them it would have been chaos.

2. Brad Meltzer's very funny video about his reviews on a book, which I blogged about on this site a while ago was a highlight of what to do as an author.

3. Five printed books are sold for every "E" book. Paper is still supreme as I write this.

4. The Employees for Amazon were enthusiastic, interesting and friendly. That company knows who to send into the field for maximum impact. Well done.

5. Saw John Lithgow at the Harpercollins cocktail party. He was friendly and smiling. Nice.

6. Some interesting books are launching. One, called "Pure" is about a dystopian future and has one of the coolest covers ever.

Clock is ticking and I'm off onto the #6 Subway to Uptown. More, with links, later!
Posted by Jamie Freveletti at 7:44 AM 13 comments:

I've been reading a couple of mysteries and thrillers--unusual for me because I'm writing continuously now and don't like to read others while I write-in order to nominate on various awards and moderate a panel at Printers Row Lit Fest in Chicago. One of the novels is written in first person, the others in third. I'm not surprised that the first person novel is a mystery, while the third person fiction is a thriller.

I love first person. Especially one as well written as the novel I'm reading: The Damage Done, by Hilary Davidson. It feels like you are right there with the protagonist as she moves through the mystery. The immediacy is wonderful, and as the clues unfold the reader experiences the "aha" moment along with the character. This novel is filled with a cast of shadowy characters that surround the sister of the main protagonist. The sister has a long history of drug addiction and collects trouble in the way that you would expect when someone deals with the fringes of society so long. When the addicted sister is found dead, her older sibling returns to New York to solve the mystery.

First person can present problems for the writer. How to describe the character's physical appearance without having her look into a mirror? Ms. Davidson does a wonderful job weaving in the protagonist's love of classic movies and physical comparison to Ava Gardner. Well done. The story's cast of characters, from a police detective to a Pakistani "import/export" specialist are dark and filled with contradiction. I wouldn't call Ms. Davidson's book noir exactly, but it has the brush of it in a new, modern way that's great to read.

Third person, on the other hand, allows a myriad of options both for the writer and the reader. In this form, the reader gets the benefit of crawling into the mind of several characters and there's nothing more chilling then being the fly on the wall when the killer starts to justify the act. The other novel I'm reading is The Outfit's own Kevin Guilfoile's The Thousand. If you like the Stieg Larsson novels, you'll love this one because it has a believable premise with a heroine that is unusual and tough. This is a great read that is a thriller but with the puzzle plot that's pure mystery. Wonderfully written, this book takes a great premise: a woman with an unusual ability that sets her apart and ties it to an ancient cult. Very very cool stuff and probably best written in third person because it goes back in history.

It's tough to keep a thriller moving when in first person. I know, because I've tried it. One of my manuscripts--written after my debut but never shown to either my agent or editor--initially started out in first. After two thirds of the way done I realized that I wanted to get into the mind of the killer and show how he was tracking the protagonist, but I couldn't because it would involve showing things that a first person character couldn't possibly know. I ended up rewriting the manuscript in third person in order to do justice to the idea that I had. What I lost in intimacy I gained in plot in that case, but that's a call that only a writer can make. Sometimes a story requires first person. Especially in a story of self discovery, as is Ms. Davidson's, where I think third person would not have been as effective.

I've seen writers that bounce between the two forms in the same novel. Harlan Coben has done this to great effect, as has Barry Eisler. It's tough to do without jarring the reader and takes quite a bit of skill. Both these writers have that skill and I think the switch up worked just fine. Notably, neither writer does this in every book. Once again a writer making a decision about form for each individual story.

I'll be reading two more novels in the next three weeks in order to moderate the panel at Printers' Row. I'll post about those soon!
Posted by Jamie Freveletti at 8:44 AM 23 comments:

Fiction in the Future: Which Books Get it Right? 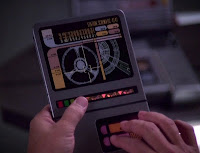 
I was watching Star Trek: The Next Generation the other evening and was astonished to see Jean Luc Picard using a tablet computer device to create his upcoming lecture on archeology. (For Trek fans, this was the episode where the woman in his life "Vash" returns). I found the above image from another Star Trek episode, but the one Picard used was larger and a dead ringer for a Kindle. I checked the date of first airing: 1991.

I loved the idea that what the mind imagines the world creates.

I have a couple of books that I've created that have predicted events that hadn't yet occurred in real life, but did shortly after. In Running Dark I wrote about pirates overtaking a cruise liner. The pirates that we take for granted today hadn't yet taken a ship, but in the months after I had submitted the manuscript they began their kidnaping spree.

My next book, The Ninth Day deals with another idea that I had but had yet to occur. Just this week I saw a splashy report discussing the issue I have written about. The book doesn't launch until October 11, so I'll keep it under my hat until then, but believe me I was astonished to see the report. Every scientist I contacted while researching my idea acknowledged that it could work, but all said it was theoretical at best. (They must have known the scientific journal would shortly confirm the idea but probably couldn't clue me in for confidentiality reasons, which I understand completely).

I have a screenplay that I wrote several years ago that also deals with tracking devices in a cell phone. We had them then, but only recently have our phones had the ability to log and store locations, much to the surprise of consumers but not so much to Apple insiders.

All of these ideas of mine, though, come from actual research into current events and technology and I simply extrapolate from there. Not so hard to do, really, if you have a knack for research, love reading about anything, and have the imagination to expand on the idea.

But my question is this: what books have you read where the author got it right? Books that were so far ahead of their time that, when the events or future did shape up that way we kind of shake our head in awe?

Got any you love? Do tell!