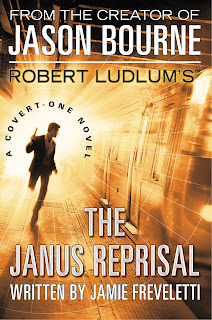 I am pleased to announce that the book I wrote for the Estate of Robert Ludlum is on sale today! Several people have asked me what it was like writing a continuation of a series begun by a legendary writer such as Robert Ludlum and I can say this: Scary, fun, difficult and engrossing, but the things that I thought would be difficult weren't and the scary aspect just had to be ignored or nothing would get done.

I was and remain a huge fan of Robert Ludlum, of course. His The Bourne Identity is just about a perfect premise for a novel; you've been shot, have lost your memory, and are learning bit by bit about who you are and the signs are pointing in an ugly direction.

I had to think long and hard about what Ludlum would like as I wrote. His books contained international plot lines, non stop action and nasty players in the world arena. They often dealt with government gone awry. The Covert One series is about a group of covert operators accountable only to the President of the United States and deployed by him when matters get deep and ugly.

The main character, Jon Smith, is a military man, microbiologist and a member of the United States Medical Research Institute on Infectious Diseases at Fort Detrick. (USAMRIID actually exists and a strain of anthrax there was suspected to have been used in the mailings from 2001). He's the perfect Ludlum character because he's upstanding, competent and willing to do what it takes. While he's not as dark as Bourne, he's just as deadly.

I learned that I was chosen to write the next in the series while I attended a mystery conference called Bouchercon. My own debut novel, Running From The Devil had just won a Barry award for best first novel and after the ceremony I met with the representatives of the Estate in the hotel bar. I remember sitting in the Hyatt and thinking what a wonderful, and slightly surreal, day I was having. Later that evening I was charged up and started writing. I realized that I wanted Jon Smith in trouble from the moment that he opened his eyes and I wanted the trouble to just keep coming. He's in a hotel that's under attack by terrorists. The first line is this:

Lieutenant Colonel Jon Smith opened his eyes to see a shadowy figure standing at the foot of his hotel room bed pointing a gun at him.

The terrorists are swarming through the hotel, where leading scientists and doctors from around the world are attending a meeting of the World Health Organization. The attackers have a hidden agenda. While the hotel is under attack, Oman Dattar, a strongman who is held in a prison nearby while being tried by the International Criminal Court for crimes against humanity, escapes.

Dattar hates the United States and holds it responsible for his arrest and extradition and he also hates Britain, because that country has agreed to imprison him. He acquires a deadly weapon that kills silently, quickly, and once deployed cannot be contained, and he begins to carry out his plan of revenge. Smith and the other members of Covert One will have to use all of their skills to stop him.

I had a blast writing this novel, and I hope you enjoy it!

A  niece of mine recently had her class read The Invisible Man by H. G. Wells, and she wrote to ask me why I thought the novel was subtitled "A Grotesque Romance" as it certainly wasn’t a love story.  I hadn't read the book, but I did see a film version.  The question intrigued me, though, so I did a little research and came up with the following:

According to Wikipedia, "The romance novel is a literary genre developed in Western culture, mainly in English-speaking countries. Novels in this genre place their primary focus on the relationship and romantic love between two people, and must have an emotionally satisfying and optimistic ending."

Not having read The Invisible Man, I can't say whether the main character, Griffin, is in any way a sympathetic or noble figure, or if the novel rises to the level of a literary tragedy, but The Invisible Man seems very similar in theme and moral to Mary Shelly's Frankenstein. (The title of which is the name of the egocentric doctor who created the monster, not the name of the monster itself.) Frankenstein is a classic tragedy of a good man whose ego got the better of his common sense and humanity.  The Invisible Man seems to have the same disorder.

That's my take anyway.  Someone must have read both novels and formed an opinion on the subject.  What do you think
Posted by Michael Dymmoch at 5:22 PM 26 comments: