In spite of their titles The Man Who Understood Cats (Man Who...), The Death of Blue Mountain Cat (Death...), and Incendiary Designs (St. Martin’s wouldn’t publish it under its real title—Cats Burning. NO FOUR-LEGGED CATS WERE HARMED IN THE PRODUCTION OF THE STORY!), my books aren’t about cats!

Except as metaphor: the cat as a metaphor for the detective, the solitary hunter, the creature driven by curiosity and oblivious to social approbation. The human protagonists in my books exhibit stealth, patience, occasionally guile—cat qualities. They’re compulsive observers. They can’t ignore a movement, however subtle, on the part of their natural prey.

While the human characters in my books may be catlike, the cats (there are cats) are realistic. Freud and Skinner (a black domestic short hair and an orange tabby respectively) are no more talented than any feline you’ll find at your local S.P.C.A. They fight. They cough up hairballs. They bring mice home for their people. They don’t contribute materially to the solution of crimes. (Although they did inadvertently save Dr. Caleb’s life once.) Psyche, a tiny calico who made her appearance in Death..., is adorable, but no more so than any kitten.

My books also feature dogs. Toby, John Thinnes’s yellow Labrador, is a bright, friendly creature, but no Rin Tin Tin. To date, Toby’s only contribution to the solution of a crime was to call attention to himself by relieving himself at a crime scene (Death......). In a future book, Toby may assist on a stake-out by allowing Thinnes to pose as a dog-walker. But that will be the limit of his involvement. Toby’s a civilian. And the cops don’t like civilians screwing up their scenes. Toby’s not the only canine in my series. Miata, the Doberman pincher who makes a cameo appearance in Incendiary Designs, is a real dog whose human, Deen Kogan, bid in a literacy benefit auction to have Miata named as a character in Incendiary Designs.

Besides suggesting parallels to the human actors, the animals in my books help define character. Dr. Caleb is a man who understands cats and, by extension, cat-like humans. He’s a man who lives alone but prefers company—hence his cats. Detective Thinnes is a hard boiled Violent Crimes cop, a man who cannot bring himself to tell his wife he loves her. But he’s also a man who’ll spend his last five dollars to feed a stray dog. Neither Thinnes nor Caleb would ever talk to himself, but neither would hesitate to discuss things with his familiars. Toby also provides the opportunity for insight into Thinnes’s relation with his son, Rob, and a chance for the author to point out the irony of callused cops going marshmallowy around ducks and puppies.

Not all fiction is autobiographical, but belonging to a pet gives an author plenty of free material (the mouse incident, for instance). And if the realism is in the details, details like the antics of a family pet contribute significantly to the verisimilitude of the story.

by Jamie Freveletti
Hurricane Irene is blasting its way up the coast in a fierce display of nature over manmade and it got me thinking about books that include weather as a key aspect of them. Here's a short list of the ones that I read and liked:

1. Eye of the Needle: Ken Follet.
Woman on island with hurricane approaching. The isolation and final payoff is creepy and cool.

2. Smillas Sense of Snow: Peter Hoeg
Loner woman stumbles upon plot. As I recall she's part Inuit and has a myriad of ways to describe snow. Loved it!

Snow again. Great descriptions of just how cold it feels when a snowstorm causes the bus that Reacher is riding in to slide off the road. Those of us living in the plains and midwest will relate!

A sad tale of what happens to a team of mountain climbers that head up Mount Everest and are confronted with terrible weather. Often heartbreaking life or death decisions are made.

Another true life story about fishermen when they encounter a massive storm.

These are just the stories that I've read and liked and so can suggest. If you have others, would be happy to hear about them!

Posted by Jamie Freveletti at 8:25 AM 20 comments:

Hi, all. Having presented a bunch of smaller workshops over the years, I had the opportunity to conduct a full day on writing crime fiction at the Midwest Writers Conference a few weeks ago. The response of attendees was so good they inspired me. (Warning.. do not get inspired often -- it leads to work.) At any rate, I've decided to offer an intense one-day writing workshop here in Chicago... it will be at the Winnetka Community House on either September 24 or October 29.

Here's the gist of it:

Anatomy of a Crime Novel: The Craft of Crime Fiction"
Conducted by Libby Fischer Hellmann

They say that writing a publishable novel is 5% inspiration and 95% perspiration. In this hands-on intensive session, you'll sweat it out by exploring the elements of craft that make a crime fiction novel impossible to put down.

Whether you write cozies or hard-boiled, PI or amateur sleuth, you'll learn how the effective use of plot, narrative, voice, setting, character, dialogue, and suspense can take your work to the next level.

The workshop will focus on the practical as opposed to the theoretical, so be prepared for plenty of exercises and discussion.

Included in the price is a critique of 20 pages from your manuscript, provided it's submitted 30 days after the workshop. Libby will mark up the mss. using "track changes" and will talk on the phone with you about her comments.


Thanks. And now, back to your regularly scheduled programming.

Posted by Libby Hellmann at 9:25 AM

Mysteries and Thrillers at the Beach 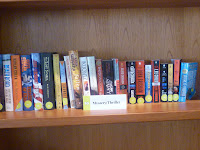 I'm technically on vacation, (so writing this on the fly) but wanted to show everyone what Mysteries and Thrillers are traveling the world. Don't know if this image is clear enough, but the shelf that you see here is in the library of the Cuisinart Resort in Anguilla. Of course the minute we landed I headed into the library to get a look at the books. This picture shows only the Mystery and Thriller category and only those that I could manage to get into one photo.

They have other categories as well: Teen, Fantasy, Sci Fi, Romance and Self Help and Non Fiction. By far the most books were in the Mystery and Thriller category, which is not that surprising as the genre lends itself to a relaxing beach read.

The names are some of the best: Chandler, Slaughter, Cussler, Patterson, Grishom, Child, Coben, and Lescorat. By far the ones with the most on the shelf were Patterson, Cussler and, in the romance category, Nora Roberts with Harry Potter dominating the Fantasy section.
Patterson's teen series also were predominant on the Teen shelves with his Maximum Ride novels, which gives you an idea of the empire Mr. Patterson has created.

It's a lot of fun to see which novels the guests brought to their vacation, and the resort encourages everyone to feel free to leave the books behind for the next guest to enjoy. I picked up "As Husbands Go" by Susan Isaacs (still writing my own so avoiding thrillers) and am enjoying it immensely. My thanks to whatever guest left it behind!

Writing as a Profession

At a recent dinner party my friends and I started discussing our previous jobs, from the earliest to present. Once we began going around the table asking the best and worst jobs we've had it became really funny. I've continued the discussion by asking those I meet to tell me their experiences. At least two had worked in some sort of meat processing facility and both quit after three days. Apparently you don't want to see how sausage is made, nor do you want to work on a poultry farm.

Others discussed the grind of physical labor. Lifting cords of wood and shoving steel wore out two friends, even though they were young when they attempted it. Watching children in a summer day camp climbed the list for one as the most stressful job she's ever had. She said it takes a special person to handle thirty children at once. She's says now when her three seem to be running in all different directions she calms herself by remembering the thirty. Most seemed to like being a waiter or waitressing (I did as well) and one loved working summers at a summer camp.

It never occurred to me how different it is to be a writer until I happened to pick up some email the other day while on the fly. It was work related-- I have a separate email address only for my agent, publicist, editors and publishing houses-- and it was about the upcoming launch of The Ninth Day. Because the launch is less than two months out (September 27) I'm in the prelaunch period where there are a lot of decisions to be made. Tour schedule, signings and marketing. I picked it up on my phone on a late Friday and it was an easily handled request.

Now, as a lawyer, any given day would have included an email or call from a panicked attorney in the firm with a crisis that needed to be addressed that minute. By that I mean drop everything else and head to the office immediately. I once got a call on a friday at noon from the mail room. A sixty page injunction was coming through by fax with an emergency hearing in a far north suburb. It was the Friday before the Fourth of July. Yep, some lawyer had arranged the hearing for what he thought would be the worst possible time for the opposing counsel to appear. Of course everyone was already gone or at the golf course. I, however, was there and the document ended up on my desk. Within minutes I was on the road for the hour and a half drive to make the hearing.

This kind of gamesmenship doesn't seem to be the norm in the publishing world. Yes, I heard about the time that Amazon uncloaked their emails by mistake and it was discovered that some industry professionals were busy posting bad reviews on the books of their competitors. Whenever you allow anonymous reviews you'll get some bad behavior and the anonymity of the internet makes this easy to do. And I'm not saying that emergencies don't happen, but for the most part a well planned launch will address as many variables as possible well before publication date.

Probably the toughest aspect of writing as a profession is the discipline needed to write on a schedule when no one is hovering over you demanding it. It's easy to let other things take your attention away. Before you know it, you're cleaning the kitchen or fielding phone calls when you should be writing. You need to self motivate. Luckily, writing is so enthralling, that getting it done seems to be fun rather than work. And that is a great thing to be able to say!
Posted by Jamie Freveletti at 8:21 AM 20 comments:

SET THE NIGHT ON FIRE at Kindleboards

Hi, all. Those of you who are on KindleBoards might be interested in a discussion about SET THE NIGHT ON FIRE. It's part of their "Read With The Author" Book Klub, which they're in the process of reviving. I am one of six authors they asked to lead a discussion, and I had the "good fortune" to be the guinea --er -- first.

So, I'd love it if you popped over and put in your two cents. There are a bunch of threads, but you really don't have to have read the book to participate -- some of them are pretty general.

Thanks. See you over here.
Posted by Libby Hellmann at 10:54 AM