Jon Cornbleet on the Peterson Verdict

Justice has been a long time coming for members of Chicago's Cornbleet family. It's been five years since Hans Peterson drove here from New York and brutally tortured and murdered their dermatologist father in his Michigan Avenue office. 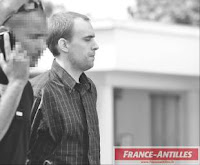 After a year-long manhunt and an even longer extradition battle, Hans Peterson was convicted this week by a French court in Guadalupe and sentenced to life in prison without possibility of parole for 22 years. It's the maximum penalty allowed under French law.

Incredibly, even though this was a huge story in Chicago in 2006 and 2007, and received national attention on shows like Dateline NBC and Inside Edition, not a single English language print media outlet has reported this week's trial and verdict (I'm not aware of TV coverage either, but it's possible I could have missed it). An exception was Whet Moser's thoughtful and personal piece on the trial for Chicago magazine's web site.

The Chicago Tribune does have a story today about an Australian who was sentenced to two months detention in Indonesia for marijuana possession, but nothing about the conviction on the same day of an American who stabbed a Chicago doctor more than two dozen times just a few blocks from Tribune Tower.

UPDATE: Here's a television report (in French) that includes scenes of the courtroom and a comment from Peterson's mother: 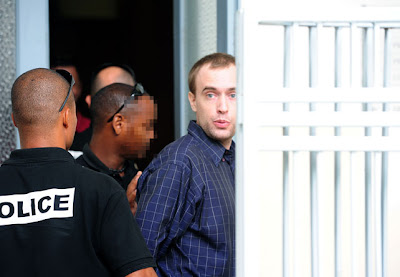 A sentence was promised by the weekend and the French courts delivered.

Hans Peterson has been sentenced to life in prison plus 22 years without possibility of parole for 22 years.

(For more background on this story look at this and here, or you can really go in-depth with this excellent Chicago Mag article from 2007.)
Posted by Kevin Guilfoile at 4:45 PM 33 comments:

Another update from the Guadalupe trial of Hans Peterson, killer of Chicago dermatologist Dr David Cornbleet. 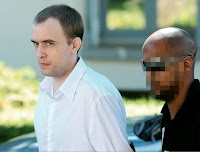 This report contains a pretty thorough summary of yesterday's testimony, including that of Peterson's French mother and the Chicago coroner who examined Dr. Cornbleet's body.

Peterson's mother, who was born in France (a fact that enabled her son to apply for French citizenship and avoid extradition) describes dramatic changes she perceived in her son after just a small dose of Accutane. The medical examiner said that the extent of the injuries suffered by Dr. Cornbleet resembled those of a "hate crime."

One interesting detail--it appears the family of Dr. Cornbleet is also represented by an attorney, who has the right to cross-examine witnesses. He pointed to Peterson's history of problems managing his anger and observed that Peterson's mother is not a medical expert who could identify a link between Accutane and Hans's ailments.

(Also, read this thoughtful, personal piece from Chicago magazine's Whet Moser on the start of the Peterson trial.)

DAY FIVE UPDATE: Shortly after the arrest of Hans Peterson, some speculated that the most he could serve under French law was 20 years. Today, the prosecution asked for a sentence of life plus 22 years.
Posted by Kevin Guilfoile at 8:26 AM 74 comments:

The Prisoner Who Now Stands Before You

On October 24, 2006, Hans Peterson drove a rented car from New York to Chicago and walked into the Michigan Avenue office of dermatologist David Cornbleet. His intention was to torture the 64-year-old physician with a knife and blowtorch. 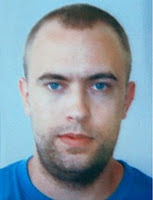 Torturing and murdering someone, even someone more than twice your age, turns out to be more difficult than it seems. Dr. Cornbleet fought back. Peterson eventually overpowered him, however, stabbing him more than twenty times until he was dead.

We followed the Cornbleet case extensively here at The Outfit, even publishing the first photo of Peterson after his arrest, and uncovering Peterson's ominous postings on an Accutane web site. But there hasn't been much news on that front in quite a while. Peterson fled to the island of St. Martin where he was eventually arrested by French authorities. He has been sitting in a jail in Guadalupe for four years.

Today he finally goes on trial for "murder and acts of torture and barbarism." (Even though this was once a high-profile case with primetime network coverage and an appeal for extradition from then Senator Barack Obama, I can find no coverage of this at all in the English-language media. Many thanks to the pen pal who alerted me to the news.)

It appears the case will be a war of experts, with the defense attempting to mitigate Peterson's guilt by claiming that the Accutane prescription Dr. Cornbleet had written for Peterson's acne several years before the murder caused significant and irreversible damage to Peterson's brain.

French justice is slow to arrive, but swiftly delivered, apparently. A verdict is expected by the weekend.

UPDATE: Here is a very brief summary of the first day of testimony.

UPDATE 2: Summary of Tuesday's testimony.
Posted by Kevin Guilfoile at 11:20 AM 29 comments:

Writing a Thriller: Recent Plagiarism scandal shows just how difficult it is

By now many have read about the most recent plagiarism scandal involving Assassin of Secrets, a spy novel that received high praise and launched a couple of weeks ago. Since the launch, it's been discovered that the author lifted entire passages from over thirteen spy novels, including those written by such famous authors as Robert Ludlum and Bond author Raymond Benson, (a lovely and multi-talented man who lives here in the Chicago area). When asked why he did it, the author mentions (I'm paraphrasing here) that after he sold the book to Little Brown he received extensive edits from his publisher that amounted to a nearly entire rewrite of the manuscript. Upon receiving the edits he realized that: 1. that he had to create these edits in record time and 2. began to have serious doubts about whether he could create something compelling enough to satisfy the house.

Welcome to the world of thriller writing.

In fact, welcome to the world of writing in general. If you're a writer and reading this then you know just how difficult it is to create a scene that holds together and drives the story forward. In thriller writing that scene may also include action sequences, which I love to write but have their own rhythm and can fall flat if not done just right.

If you're a reader then you know, too, because a thriller requires a certain type of pacing and detail that is the mark of an interesting read. Readers know what a thriller feels like and they aren't confused about the work that goes into creating such a novel. I know this, because before I became a writer I was-and am- an avid reader. I'd read a book by one of my favorites and think about how tough it must have been to write over three hundred pages that kept me so enthralled. I never took books or authors for granted.

Writing is a struggle enough when not under deadline, but when under deadline or when asked to rewrite passages a writer can freeze. I remember the joy of writing my first before I sold it. It was just me and the story late at night when the city was quiet and I allowed my imagination to fly. After Running from the Devil was sold I, too, like every other author, received a list of suggested edits from my editor and a few short weeks to create them. Panic, especially if you are doing it for the first time, as I was, can set in. You think, "I just wrote this and now I have to write it again?" Some authors have confided to me their anger at having their scenes gutted or questioned by the editor. They spent months writing them only to find them marked out and left on the cutting room floor.

From the first time it happened to me I remember looking at the list of edits and taking a deep breath. I knew intellectually that they would probably make the book better, but I was frightened that I would not be able to produce on a regular basis. Yet, once the book is sold that's what you are asked to do. So I created a mantra for myself and it goes like this:

You're a writer. That's what you do. You should be able to rewrite this scene a hundred times and make it interesting. So let's go.

If you're writing your first and haven't sold yet you are in that wonderful place where it's just you and your imagination. Enjoy it! When you do sell it will still be magical, but the reality of other expectations will crowd into the room and stand at your back as you write. Don't worry, it's not all pressure; they'll applaud, too.

And when I looked at the list of thriller writers that were plagiarized it makes me want to go out and read their novels. They're all good, but because Raymond Benson is a Chicago based author and this is a Chicago blog I suggest that you start with his latest, The Black Stiletto.

Posted by Jamie Freveletti at 7:34 AM 36 comments:

My last post talked about an author that wrote one amazing book and never wrote another and I got to thinking--who is a one hit wonder and why? We hear them all the time when dealing with songs, so what makes an author write one (or two) and then walk away?

For those who missed the last post, the one hit there was Zemindar, an epic story about the Sepoy Mutiny in India 1857. Valerie Fitzgerald wrote an amazing story and never wrote another. I compared this book to Gone With The Wind, and...guess what--Margaret Mitchell only published GWTW during her lifetime. Another manuscript was found after her death. Seems as though for these two authors one epic historical novel was enough. Perhaps the research required was just too taxing, or they thought they would be unable to top the earlier work.

I did a quick google search and found that some of our most famous novels are one hit wonders. From the well known To Kill a Mockingbird by Harper Lee to Ralph Ellison's Invisible Man the list is distinguished.


I've also found great books by writers writing under a pseudonym who then give it up. I remember reading Stephen King's Thinner written as Richard Bachman and wondering "this writer is great, why doesn't anyone know about him?" Ha!  Joke was on me.

Without a doubt, creating a novel is a labor of love and work and I can understand someone having done it, done it well, and then deciding to move on to another medium. Apparently this is what Oscar Wilde did after The Picture of Dorian Gray.

Which makes me think--are there any great books that you've read that never received the acclaim you think they deserved? These novels were "one" but not a "hit?" I'd love to learn about them and add them to my "to be read" pile!