The end of Izzy McNeil? 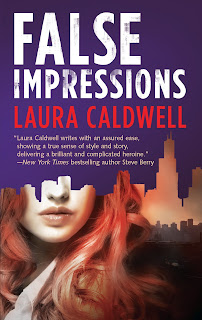 False Impressions, the 6th suspense novel in the Izzy McNeil series will be released in a few weeks. The cover shows a piece of art, paint dripping to form the Chicago skyline. The rest of it shows the face (the bottom half anyway) of a beautiful redhead. My publisher and their cover designers had nailed the image—the woman on the cover is, in fact, Izzy in my head, as well in my publisher’s collective mind and hopefully in some readers (although really, we encourage you to envision the characters any way you’d like. To me, this trait remains the number one draw for reading)).

In writing it too, my editor and I had been in perfect agreement on everything. Same for my freelance editor (the fact that she’s my sister made this all the more remarkable). Stylistically, everyone on the team saw the book—an art mystery about the stalking of an Chicago gallery owner—in the exact same way.

So six books in and it seems we’ve figured Izzy out, at least in her current permutation as a human. Is it time to say goodbye? For the moment?

I spoke to my agent and my publishers' and we decided on a trilogy about Izzy McNeil. In the first, Red Hot Lies, she’d lose her boss, her fiancé and a job. None of us were sure whether she’d get any of those back. The events that started it all for Izzy would also be the ones to cause her to question—with a great amount of concurrent curiosity and sadness—whether she knew anything about herself, her world, or all the rest of it.

In Red Blooded Murder, the second, she tries her hand at a TV new gig for a legal cable station.

Red, White & Dead, the third of the trilogy saw Izzy getting back on her feet, starting to come into her own, working in the law again with best friend, Maggie, and as a P.I. in a side-job for John Mayburn. She did not want for gorgeous men. But she also couldn’t choose among them.

There seemed to be so much more story to tell, so we decided we’d do four more Izzy novels which included Claim of Innocence and Question of Trust leading to the newest one, False Impressions. Yet now that it’s done and almost out into the world, finding Izzy in a very unexpected place, it feels like a good place to stop. Or maybe to just pause and let Izzy grow on her own now that she’s ended up where she has? We won’t give away a spoiler, but when read it let us know what you think.