The Jury Is In

Ask this question to anyone who works at 26th and Cal (the hub of Chicago's criminal legal world and the busiest court system in the nation)--How often does a criminal defendant get together after trial with his jurors?  You'll probably get a laugh. The answer will likely be 'almost never.' But the case of Jovan Mosley, and the dedicated jurors who decided whether he was guilty of murder, has never been typical.

After Jovan's trial, lead attorney, Catharine O'Daniel, and I went in the jury room, where they made us promise to take care of Jovan. Then they did one better. The foreperson--Andrea Schultz, took Jovan shopping for school supplies. Another--Alfonzo Lewis--called me frequently for updates on how Jovan was doing. A few months later, they both suggested a reunion.

I wrote about this juror reunion in the book Long Way Home: The Story of a Young Man Lost in the System and the Two Women Who Found Him. A few people wrote me, wondering if that occasion had really taken place. Today, while defragmenting both the computer and the home office with Carol Miller, I found lost photos from the event. Since Long Way Home is newly out in trade paperback (purchase here B&N, Amazon), I thought I'd share them. 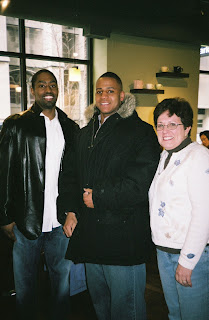 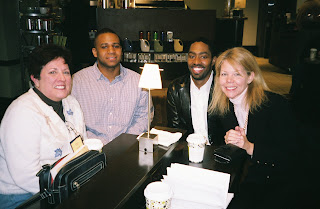 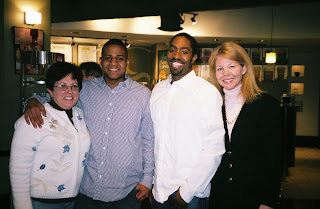 Farewell to the Outfit?

A must read (and slightly zany) article in Chicago Magazine this month: The Mob's Last Gasp
Posted by Libby Hellmann at 9:45 AM