The Drug Enforcement Administration (DEA) has scheduled another National Prescription Drug Take-Back Day which will take place on Saturday, April 28, 2012,  from 10:00 a.m. to 2:00 p.m.


This is a great opportunity for those who missed previous events, or who have subsequently accumulated unwanted, unused prescription drugs, to safely dispose of them.


TO FIND A LOCATION NEAR YOU GO TO:  http://www.deadiversion.usdoj.gov/drug_disposal/takeback/


Those who participated in National Prescription Drug Take-Back Day on October 29, 2011 turned in more than 377,086 pounds (188.5 tons) of unwanted or expired medications for safe disposal.  Let's make this month's totals even better. 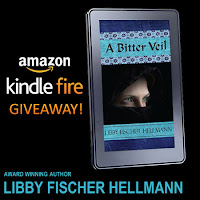 Interested in winning a Kindle Fire? If so, come on over here to find out more. The contest is running now.


On Tuesday, April 17, at 6 PM (Eastern time so plan accordingly), Libby Hellmann will be talking about A BITTER VEIL, the state of publishing, and anything else that's on your mind during a 45-minute video chat online!


Shindig Events is a brand new service that allows up to 500 people to interact together. And it is so easy to use that even her 92 year old mother will be there. All you do is go to this website. That's it! You'll be able to ask questions, watch a slide presentation (don't worry—it's short) and even chat among yourselves. So please kick back and join her online.


RSVP here to get a same day reminder or just come on over.

Thrillers and Romance-Oil and Water or Does Danger Add that Certain Something?

The Romantic Times Convention is in Chicago this weekend and The Outfit members will be there enjoying every minute. I've never been to an RT Convention, and having it in Chicago is a wonderful opportunity to attend. Of course, I got to thinking, does a Thriller writer belong there? It seems as though thriller writers don't write romance and often, if they do, it just gets panned, or worse yet, nominated by The Literary Review for the "Bad Sex in Fiction" Award.

I'm not kidding, the award exists. Here are the 2011 nominees.
And can I tell you how I do NOT want to make this list?

Writing romance in a thriller comes with a certain set of logistical problems that are built into the genre. By definition, a thriller sets a protagonist against an antagonist that wants to kill or maim. When you're writing one you'd hate to have your protagonist do something silly rather than try their damndest to get to safety. That's a quick way to lose a reader. So, you try to imagine what a real person would do in the same circumstances. If someone was running toward me with murderous intent romance would be the last thing on my mind. I'd be running--as fast as I could run. Likewise, if cornered I'd be working out in my mind which aikido move I would use to disarm the assailant before--you guessed it-- running away.  I teach aikido and I always emphasize to my students the running away option as optimal in all circumstances. I tell them the best aikido move is the one that allows you to avoid doing any techniques.

But there is something interesting that occurs when one writes a thriller with a female and male character. There's always a question in the reader's mind whether they're going to stop running away or solving the mystery and take some time out to get it on. The best thrillers have sex scenes, both in the movies and in books. In one of my favorite books, The Bourne Identity, Jason Bourne and Marie are in chased all over and hole up in a hotel alone, worried, and wired. They find the perfect way to address their surfeit of adrenaline.

And in the movie North By Northwest the character played by Cary Grant gets chased, a lot, but somehow ends up romancing the woman who may or may not be a villain.

The romance in North By Northwest is handled well, though, and his concerns about her add to the suspense. I also liked the approach taken by the X-files throughout all the episodes until the very end. They were colleagues first, began to care about each other, and then became lovers.

Because I write a female protagonist who is action oriented, I don't have her worry too much about what the men are thinking or not thinking with regard to romance. The men hit on her a bit, but most need her unique knowledge and sharp brain to help them get out of dangerous circumstances and they focus on getting out of trouble first.

However, I do think that she'll have a free moment soon. Maybe on a train ride like the one above.

And when she does, let's just hope that the resulting scene doesn't get nominated for the bad sex in fiction award by the Literary Review!

I look forward to seeing everyone at the RT Convention!

Posted by Jamie Freveletti at 5:52 PM No comments: 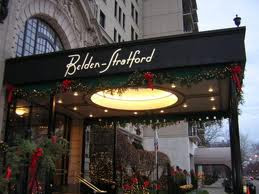 
I first came to Chicago in the fall of 1977. At the time I was looking for a job in broadcast news (Which turned out not to be, but that’s another story). I’m still not sure who told me about it, but I stayed at the Belden Stratford, an apartment-hotel in the middle of Lincoln Park, which at the time, housed one of the best Mandarin restaurants in Chicago, the Dragon Inn. (I still go to the Dragon Inn North – same owners). 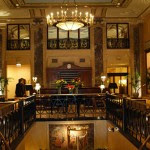 In 1977 the Belden-Stratford wasn’t an assisted living facility, but you might have mistaken it for one. Formerly an elegant hotel, the lobby still had a patina of style, but most of it had faded into a dusty, dingy, place with frayed carpets, and cracked leather furniture. (It appears to have been remodeled since). I booked it for a month, spending my time going on interviews, working freelance, and seeing the sights of Chicago.

I would get back to the hotel around four, and would be greeted by a phalanx of senior citizens lounging on chairs and sofas in the lobby. They would stare at me as I swung through the door. Most of them looked vacant, some sad, and no one smiled. I didn’t stop but made a beeline for the elevator.

One day, though, one of the women did smile at me, and I decided to sit next to her. She must have been well into her eighties, she looked frumpy, and she walked with a cane. We started to chat about this and that… nothing important, just passing the time of day. She asked me why I was staying there, and I told her. I asked her how long she’d lived there, and she told me. I was about to say goodbye and go up to my room when she said. “You’re probably too young, but do you happen to know who Benny Goodman was?”

Now, you have to know that my late father was a party animal. He was the guy everyone wanted to be around when the music started playing and the drinks were flying. And along with Frank Sinatra and Ella Fitzgerald, he had all of Benny Goodman albums. In fact, at least once a week, usually on Saturday nights, the strains of Benny’s clarinet or Ella’s perfect soprano or some other Swing and/or Big Band tune would float upstairs as I was trying to fall asleep. I told the woman that.

Once I put my jaw back in alignment, she said, “Come with me, sweetie.”

We went up to her small, cramped apartment. Every available inch of wall space was covered with framed photos and newspaper clippings. Other mementos spilled onto end tables next to china figurine miniatures, lace doilies, and other tchotchkes. Most of them were a memorial to her brother.

There were photos of him playing with Gene Krupa and Harry James at the Blackhawk restaurant, album covers (some the same as my father’s), family photos taken in the Maxwell Street area where they grew up – there were twelve siblings – and one photo of their father, who died before his time in a traffic accident.

I was fascinated and looked through everything. Then I asked if I could bring my camera down so I could take pictures of the pictures for my father.

“I have a better idea,” she said (To this day I can’t remember her first name… my bad). “How would you like a photo?”

I nodded, and she gave me a picture of Benny, Gene Krupa, and Harry James. It was a candid, and they were rehearsing. She didn’t know where. I do remember two of them (don’t recall which ones) had cigarettes burning.

I sent my father the photo the next day.

That was my first “Chicago” moment, not particularly exciting or memorable except to me. A piece of Chicago’s past had been shared with me, and I felt a bond with the city, its history, and the talent nurtured on the shores of Lake Michigan.

That was over 30 years ago. Benny Goodman is gone, his sister is too, and so is my father. But during the few moments I spent in her apartment, something registered. A sister who was inordinately proud of her brother and was able to tell the tale to a younger person who appreciated it.

It was a special moment, and I knew from that day forward that I belonged in Chicago. Come hell or high water. Maybe even so I could tell this story one day.

Stick around to hear SIng, Sing, Sing, by the Benny Goodman Orchestra (with Sid Casear too)! 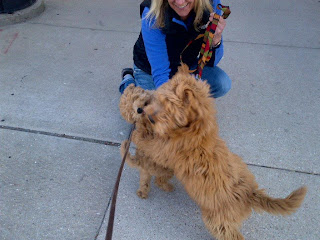 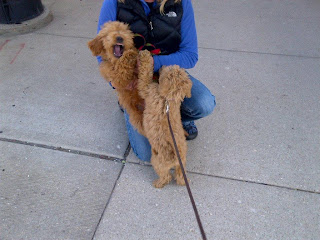 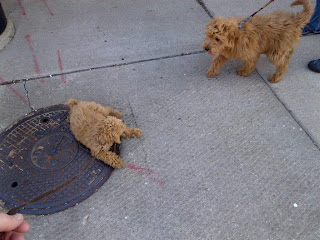 Chicagoans say it often—Chicago is such a small town. The big-city-that—sometimes-feels-like-a- hamlet is of the reasons authors like to set books here. It isn’t outside the realm of possibility (in fact, it’s squarely inside) to have a character run into someone she knows on the El train (or at least someone who knows someone she knows). Who knew it was true for dogs as well?

Today, Shafer was raring to go for a walk. We went to Jonquil Park, where she endlessly chased and fetched a white ball. Then we headed home.

Shafer is the kind of dog who likes to sit in the middle of a walk, just to curiously watch a branch-ful of birds. I figured that’s what was going on when she suddenly plunked down in the middle of a sidewalk on Schubert Avenue. It was curious, since my house was in view (a sight that normally makes her pick up the speed).

Across the street, the door to our vet’s office opened. Shafer perked up and started heading across the street in that direction, then veering to the left when she saw another dog.

As we got closer to the dog, I noticed that the dog’s owner was a blond woman dressed in jeans, and the dog…? Well, the dog looked an awful lot like Shafer, only bigger and with redder hair. The other dog looked up.

“Is that a goldendoodle?” I asked the owner.
“Yeah,” she answered. “His name is Sailor.”
“Shafer is a goldendoodle too,” I said, pointing.

Suddenly, the two dogs lunged like they were long lost cousins. Then they commenced playing and jumping all over each other for the next twenty minutes. It took only one of those minutes for the owner and me to discover that we had both gotten our dogs from Country Mini Doodle in Tipton, Indiana.

She told me that they were in the neighborhood that day to get Sailor’s shots at the vet’s. He was in the waiting room when he suddenly whimpered, which he rarely does. His owner took him outside. And there was Shafer. Turns out they were born within a week of each other. We’re tracing family lineage. It’s possible they’re not just long lost cousins but siblings as well.

Meanwhile, this is giving me the stirrings of a new book…..
Posted by Laura Caldwell at 4:58 PM 21 comments: