Today's Guest blogger is S. M. Harding, author of 24 published short stories, photographer, and editor of  Writing Murder, a collection of essays by Midwest crime and mystery authors. The handy primer on the art of crime fiction is based on a successful lecture program held at the Mystery Company in Carmel Indiana. (Disclaimer:  I am a contributor.) 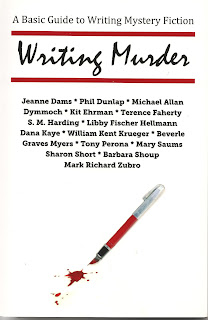 "When it comes to writing crime fiction, I dislike rules. The kind that say, “You must have a body (preferably dead) in the first chapter.” I know you know what I mean: how-to writing books that are rule-bound, prescriptive, and formulaic.
As a teacher most of my life, I tried to give students the basics and then say “Go play.” I tried to give them a toolbox that they could dip into to pick and choose. Basics they could use in different ways. When I started writing crime fiction, what I wanted was a toolbox – clear, precise delineations of craft that could find different applications.
Some of the questions I had were: How can I raise the suspense level in this sagging middle? My opening sucks – what can I do to hook the reader? I’ve written a character that has less personality than a cardboard cutout – how can I breathe some life into him?
I’ve finally found my ideal toolbox: Writing Murder.
(Disclaimer: I edited the book, so I may be a tad biased.)
The book began as a series of classes at The Mystery Company, Jim Huang’s bookstore in Carmel, Indiana. Each author not only presented a wonderful class, but then wrote an essay for the book. Each of them donated their work to the Writers’ Center of Indiana, publisher of Writing Murder and co-sponsor of the lecture series. Profits from the book go to support WCI outreach programs to writers, schools and prisons of central Indiana.
Outfit members Michael Allen Dymmoch (“The Bloody Ends: Killer Openings, Killer Endings”) and Libby Hellmann (“Building Suspense”) join Jeanne Dams, Phil Dunlap, Kit Ehrman, Terence Faherty, Dana Kaye, William Kent Krueger, Beverle Graves Myers, Tony Perona, Mary Saums, Sharon Short, Barbara Shoup, and Mark Richard Zubro to offer wonderful essays in voices all their own.
Mystery author Barbara D’Amato said: “Writing Murder is a wonderful read. I found something helpful in every essay. They call it a basic guide, but there is useful material here for the beginner or the much-published author.” I agree.
So, if you’ve been playing with “this idea” for a story, start with the Introduction and with each essay, begin to fill in that idea. Get the toolbox and write – after all, we’re facing the post-holiday doldrums and what could be better than spending time with your own fictional characters?"

Writing Murder is available on Amazon, or directly from the Writers’ Center of Indiana at indianawriters dot org.