Several months after Cast of Shadows was published I was doing a signing and a woman approached with the (16-hour) unabridged audiobook version of the novel. She took an excited breath and grinned and I gave her a gracious smile in anticipation of the kind words she seemed to be assembling in her head.

She got to the table and pushed the box out for me to sign and said, "I can't wait to get to this book--I listen to everything Scott Brick reads." 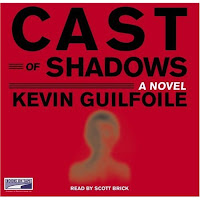 In the following months I had many similar encounters with readers. Usually they would say something like, "How were you able to get Scott Brick to narrate your novel?" I had to tell them I had nothing to do with it, but I was certainly grateful the person who did sought out one of the legends of audiobooks to read my work. Scott reads for Harlan Coben, Nelson DeMille, Clive Cussler, Preston and Child, Joe Finder, Barry Eisler, Steve Berry, and David Baldacci. He did the audiobook for Michael Pollan's bestseller In Defense of Food and worked on the upcoming 40-hour version of Roberto Bolaño's 2666. He narrates the Dune series. Scott has recorded over 400 novels in just the last ten years, and won more than 40 Earphones Awards. I can't even estimate the number of readers who discovered my work only because they are a fan of Scott's.

This month, Scott is running an unusual and exciting contest over at his web site. To celebrate his tenth anniversary in the audiobook business, Scott is holding (for lack of a better term) Audiobook Idol.

Voice acting takes a special gift and audiobook narration is something like an Ironman competition--it requires a versatility and endurance not everyone has. I imagine it's a difficult field to break into. But for the rest of June, Scott is inviting aspiring narrators to send him a three-minute demo in the form of an MP3 file. The winner will receive personal instruction from Scott, followed by actual recording work from a number of major publishers. The judges will include representatives from some of the biggest publishers in the business, including Random House Audio, Audible.com, Harper Collins Audio, Books on Tape and more.

I produced hundreds of voiceovers in my advertising years and I can tell you that not everyone with a pleasing voice is cut out for this work. But if you think you might have the storytelling gift, I've never seen an opportunity quite like this.

Tell a good story well and it might change your life.

What a cool idea! I used to think about doing voice-overs but decided I wouldnt last very long. I'd go crazy. But having produced many audio-visual presentations in the past, I have nothing but respect for narrators. And the tricks they use to keep their voices in shape. One voice-over guy used to bring apple slices to the studio. Said it kept his throat moist.

VO narration is really hard, and must be exponentially more so for those who do it for entire audio books.

Many books sing in print, but making them "sing" in audio is a different task altogether. It takes real talent to do so, and I'm glad to see that there's a small but growing recognition and fan-dom for those who do it well.

Thanks for helping to spread the word, Kevin, I really appreciate it. I've read about a dozen posts who picked up on the "Audiobook Idol" title and re-posted the info, obviously folks who (rightly) follow your work and read the info here. Here's hoping we find somebody spectacular in the contest, but if so, I'm going to warn the winner up front: they're not allowed to replace me when it comes to narrating your titles. Those rock, and I'm not sharing.

Hey I'd like to congratulate you for such a great quality forum!
Was thinking this is a nice way to make my first post!

Sincerely,
Robin Toby
if you're ever bored check out my site!
[url=http://www.partyopedia.com/articles/ladybug-party-supplies.html]ladybug Party Supplies[/url].