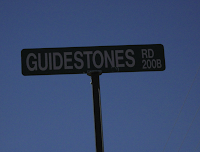 Here’s the conundrum: When you share information about the existence of something wonderful or unique or brilliant, you risk bringing it to the attention of philistines who’ll destroy it. But if you don’t share the something wonderful or strange or brilliant, it might as well never exist. I guess you have to weigh the risks and, sometimes, take a chance. So here goes…

Some months ago, my son, the IT guy, called my attention to an article in Wired Magazine about the Georgia Guidestones, a mysterious monument erected in 1980 by… 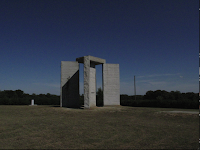 That’s part of the mystery. A plaque on the site tells the stones purpose—to guide humanity in rebuilding after the apocalypse, and who constructed the enigma, but only one person knows who designed and financed it. He’s not telling.

Since I was going to Georgia for a wedding, last month, I decided to take a little side trip to see them. Although the stones belong to and are maintained by Elbert County, they aren’t promoted as a tourist attraction. No billboards trumpet “Georgia Guidestones” on any part of the approach.

If you look, you can locate them on Guidestone Road, off GA-77, 9 miles north of Elberton. If you don’t look carefully, you’ll fly right past them because they’re set back from the road in the middle of a pasture. 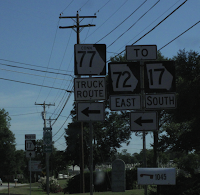 
My excursion took me half a day from Marietta GA. The roads were quite good (by Illinois standards) all the way. I got to see grain elevators, kudzu and other exotic sights en route. I would have been disappointed if I’d expected the stones to be another Stonehenge. What surprised me was how controversial this little edifice (by Statue of Liberty, Mt. Rushmore—American monument—standards) has become. I was told that an Atlanta preacher is lobbying vigorously to have the stones removed. 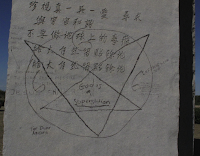 Although unpublicized and unknown—even to most Georgia residents—the stones have attracted a number of kooks and assholes who’ve felt compelled to leave evidence of their disapproval in the form of vandalism. Sadly, most of them appear to call themselves Christians—judging by the biblical quotes, although their behavior simply marks them as so insecure in their beliefs that they have to travel to the other side of nowhere to challenge what they see as a competing message.

Which is, in English, Spanish, Swahili, Hindi, Hebrew, Arabic, Chinese, and Russian:

In a country composed of immigrants from everywhere, with social and religious beliefs that are all over the planet, what’s so threatening about that?
Posted by Michael Dymmoch at 9:55 AM

What a cool story!

Kind of ironic, though--if I were wandering the apocalyptic future and came upon these rules, it would be hard not to look around at the blasted wasteland and say, "Yeah, how'd you do at these again, smart guy?"

I have to admit, I was hoping they were going to have the rules of geometry, basics of farming, and a primer on metal working, not philosophy...

Great post, Michael! A little bit of peace and reason in rural Georgia. What a concept.

Michael, I've been fascinated by the Georgia Guidestines since I read that Wired article as well. I'm jealous you beat me there.

The original article is well worth the time to read, if only for the incredibly strange story of their origin, which involves a mysterious, grey-haired man who calls himself "Robert Christian" and who shows up in this small town wanting to buy a bunch of granite and a bunch of land and won't tell anyone who he is or who he represents except the local banker, who is sworn to secrecy. It's out of an Outer Limits episode.

I'll play Devil's Advocate for a moment and try to answer the "what's so threatening" part. While holding the population down to an ecologically sustainable size might be wise in the abstract, I don't know of any way to enforce it that doesn't involve fascism. So there's that.

But these guys whoever they are aren't in any position to make us do anything, it doesn't seem, so drawing on their rock is just dumb.

Fascinating story, Michael, thanks! And well worth reading the piece in Wired.

Like Kevin, I think it's easy to see "what's so threatening" in #1 and 2. Doesn't in any way justify the vandalism, but I do see why people are threatened by it.

Ok, Guys. Remember these are rules for REESTABLISHING civilization AFTER we've destroyed the planet. If we have to start over from scratch, numbers one and two might make some sense.

In any case, If the apocalypse never comes, the stones will still be an interesting curiosity--like the Nazca lines, or the U.K.'s henges