In the Shadows We Are Free, and I Walk You Through It

Good morning, everyone, it's 7:30am. Today, it's going to be in the 70s and sunny, making it a bit warmer than it has been recently. Anyway, I'm not sure about this, but I may head out later to get a haircut (which I'm long overdue for). Sometime this week, I'll be heading out by myself for the first time ever, so my family can see how I do things, which is great news :). So, here's crime for today.

That was the opening paragraph for Wednesday, September 2 in the Avondale/Logan Square Crime Blotter. It is representative of a new genre of blogs dedicated to specific neighborhoods (and in various cities). But what makes this one worth a second look (and a third and a fourth) is the author.

Timmy is 16 years old and lives with his mother in Chicago's Avondale neighborhood. He is also autistic. Every day this summer, Timmy has risen early from bed, usually before 9 AM, turned on his police scanner and live-blogged every police call in the 25th District, sometimes until midnight when he goes to bed. Often, the only breaks in the day are when his mother calls him to the kitchen to eat. In short intros each morning, he also talks frankly about his everyday life and living with autism.

As noted in Jake Malooley's Time Out Chicago story just last month, "repetitive, solitary behavior" is characteristic of individuals with autism, but there is clearly something else motivating Timmy to be so dedicated to this project:

(F)requent readers know Timmy is motivated by a sense of civic duty, a feeling that his blog is making a difference, however small. “Believe it or not, I’m concerned for the safety of all of you. You guys are my neighbors,” he wrote in a July post after reporting a stabbing. “I do it out of concern for all of you. Aldermen like Reboyras or Colon won’t address it, so someone has to, and I chose to.”

Timmy's earnestness is also on display at The Broken Heart of Rogers Park, another neighborhood blog where he provides occasional updates on life as a student at Sullivan High School.

I first stumbled on Timmy's writing earlier this summer and although I don't live anywhere near Logan Square, I quickly became hooked. Initially I made a connection between Timmy's blogging and one of my characters, Kimball Dent, an electronics repairman who obsessively monitors the police scanner in the short story Zero Zero Day. But eventually I became interested by the many ways the site succeeds as memoir. The short strokes Timmy provides about his life juxtaposed with just-the-facts reporting of emergency calls on the scanner feels far more revealing and sincere, somehow, than one of the thousands of kitchen sink confessional blogs that are the gravitational center of the internet time suck. Timmy is an individual who sincerely wants to engage with his community and nature has provided him a unique path to that goal. Timmy's blog provides the rest of us not only with a valuable, real-time snapshot of the neighborhood in which he lives, but a small window into the life of an extraordinary kid. 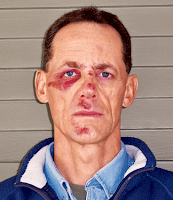 Somewhat related, I encourage everyone to read A Mugging on Lake Street, which appears in the September issue of Chicago magazine. It starts as a fascinating first-person account by the outstanding investigative reporter John Conroy of his own mugging (and its aftermath) while riding his bike home through Chicago's west side. It ends up being a critical meditation on crime and race in the city. (Photo by Matthew Conroy, from the article.)

Thanks for the link to the Conroy article. It was a thought-provoking read, and fodder for a good piece of fiction if someone chooses to run with it. The kind of thing Richard Price or George Pelecanos does so well.

What an incredible young man Timmy is. Thank you for bringing him to our attention, Kevin. I have bookmarked his blog.

Conroy is a first-class journalist, who pretty much forced the city and the Feds to pay attention to the torture ring run by the police for almost 20 years in Area II. It's extremely distressing to read about his experience and the long tail it leaves in his life and that of his family. He also mentions, in passing, that the Reader let him go, which is another outrage.

Thanks for noticing Timmy's dedicated work for his community. And ours, too.

Sure thing, Craig. As a former Rogers Park resident, I watch your terrific blog with nostalgia and interest, as well.

Sara, I agree about Conroy. As we watch our newspapers implode it's frightening to think great reporters like him don't have the support or platform they need to be our watchdogs anymore.

By coincidence, I also discovered Conroy's article--very thought provoking. As was the discussion of news in the media on Friday's Chicago Week in Review, Chicago Tonight, WTTW Chanel 11(Sept 4).

I am the kind of hombre who loves to taste unprecedented stuff. Currently I'm constructing my private solar panels. I am doing it all by myself without the assistance of my men. I am utilizing the internet as the only path to acheive that. I stumbled upon a very awesome website that explains how to make solar panels and so on. The website explains all the steps required to solar panel construction.

I am not exactly sure bout how accurate the data given there is. If some experts over here who have experience with these things can have a look and give your feedback in the page it would be grand and I'd highly value it, because I truly like solar panel construction.

Tnx for reading this. You guys are great.