Dispatches from the Road

As some of you know, I've been on tour the past few weeks. Does it help? Is it worthwhile? I don't know. I just know that, notwithstanding today's difficulties in the marketplace, as described here and here, I'm afraid NOT to tour... afraid my work will be forgotten or ignored. The bad news: I'm bone tired, cranky, and way behind in my writing. The good news: I got to meet new readers, visit new places, and get to know other writers.

One of those writers is Keith Raffel who hails from Palo Alto, and with whom I did a series of events out west. His second novel is SMASHER. We decided to trade blogs today and write about each other. What follows is his impressions of me. (You can read my impressions of him here.)

Jack Kerouac went on a road trip with Neal Cassady and the American classic On the Road was the result. I hit the road with the talented and charming crime fiction novelist Libby Fischer Hellmann. (His words... not mine, although my bank account has taken a sudden dive...)

Last spring I got an email from Cara Black, who’s as great a friend as she is a writer. She suggested that I get in touch with Libby since we both had books coming out this fall. The idea of listening to myself drone on for days scared me. I knew Libby, loved her books, and was up for the adventure if she was. She was. 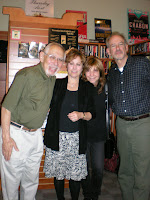 We divvied up the work and set things up for five events in LA in 28 hours and then five more in the Bay Area at the more leisurely pace of one per day. I’d drive down to LA and pick her up as she arrived at the airport from Phoenix. I did and an hour later we’d stopped at Book’em in South Pasadena. We were off.

Here’s what I learned.

She’s tireless. When I picked her up in L.A., she’d already been in Texas and Arizona. We did our ten stops in eight days together and then she headed back home for an equally grueling schedule. She was just as focused in talking to fans at the third event of the day as at the first. Wait, let me amend that. Some nights at dinner around 10, she was definitely ready to call it a night. But that’s just when she was with me and other friends. If there’d been fans there, she would have been as peppy as ever.

She’s neurotic. An example. Most writers slip into their events with seconds to spare. Not Libby. She demanded that my right foot push a little harder against the accelerator so that we would arrive at an event 30 minutes early.

She’s a great sport. At the Redondo Beach Library on the night before Halloween, she was at her best as the witty Ashley Ream questioned her. Unfortunately, the members of the audience could be counted on one hand. When we stopped at a Barnes and Noble to sign stock and they didn’t have copies of her Doubleback as promised, she calmly spoke to a manager without losing her cool. (The B&N eventually got 10 copies in)

Lucy knows all. As Dionne Warwick sang, “L.A. is a great big freeway.” I had no idea where we were going in the noodle soup of highways and boulevards that is Southern California. But Libby follows Lucy’s commandments as if she were listening to God on Mount Sinai. (Lucy looks a lot like a portable GPS, but if Libby wants to treat her words as gospel, who am I to argue?) 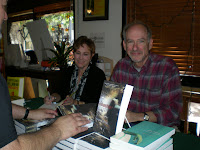 She’s a fan. Our event at the Mystery Bookstore in Westwood was followed by one featuring the terrific writer John Connolly. Even though we faced a six-hour drive from LA back to the Bay Area, she wanted to stick around because she loves his writing. “He’s pretty cool,” she said.

She has buttons that can be pressed. As stated above, Libby is a great sport, but I guess there’s still a mischievous boy inside me. I couldn’t resist saying that I write with a quota of 5-7,000 words a week. She would have gladly shot me or at least that’s what she told the audience. She finds writing the most difficult thing she's ever done and struggles to get her daily word count.

She’s yin. To my yang. Libby moved to Chicago and years later took up crime fiction there. I left my birthplace of Chicago as a child and started writing crime fiction as an exile. Libby agonizes over a first draft, but loves to edit. I love the spontaneity and creativity of the first draft, but editing seems perilously close to work.

Yin and Yang we might have been, but the adventure was terrific. I got to know Libby – which was a great thing.

PS Libby again. Just got back from the fabulous MURDER AND MAYHEM in Muskego. What a weekend.. although we missed you, Sean. I was lucky to emcee with the one-and-only Tom Schreck, aka Duffy Dombrowski, whose gloves I can only hope to fill. Thank you Penny.. and Jon.. and Ruth...and the Friends of the Muskego Library.
Posted by Libby Hellmann at 6:25 PM

Sounds like a good trip. I met Libby at a signing a couple of years ago (with Cara Black), and can vouch for her energy and good humor. EASY INNOCENCE was a great read; I'm looking forward to DOUBLEBACK.

Funny stuff, Keith. Libby sounds like a great traveling partner. Why don't y'all come on down to Florida and travel the back roads to Mama's hometown of Himmarshee with me?

Dana, do read Doubleback. You won't be sorry! What do you say, Libby? Next time should we hit the Sunshine State as Deb suggests?

I don't know, Keith. At this point I'm ready to turn back into a mushroom....

Libby, and Keith, there's so much to respond to in this post. First, Keith, you're so right about Libby, about her energy and creativity and responsiveness. In the short time I've known her, she's impressed me repeatedly on all those fronts. A very generous soul, in private as well as in public in her response to other writers. Of course, everyone in the OUtfit knows we only exist because of her energetic willingness to embrace new media.
Second, the link to Declan Burke just about broke my heart. The Book of O is such a fine book--imagine PG Wodehouse meets James Lee Burke, if you can and you sort of have the Book of O.

I just realized I screwed up the links on my post this morning. Sorry. The second link at the beginning was supposed to take you to Dan Menaker's (the former executive editor at Random House) article about publishing written in September.

I have to warn you, though, it's just as grim as Declan's post. Here's the link, for the stalwarts:

And thanks for the kind words, Sara.

I was indulging in some nostalgia about traveling with Libby and finishing the first 2 dozen events of my book tour. Alas, the warm feeling couldn't last. I just read the Declan Burke and Dan Menaker pieces, both as frightening as good crime fiction should be, but even more frightening for being non-fiction.

I am Very thank full the owner of this blog. Because of this blog is very informative for me.And I ask u some thing You make more this type blog where we can get more knowledge