A Pox Upon Your Newspeak

by the "Un-good" Libby

I was about half-way through a blog about the collapse of Chicago’s plan to provide wireless internet service throughout the city – and I still wonder whose greed scuttled what could have been a noble effort to empower citizens -- when I ran across something, that, for lack of a better cliché, makes my blood boil.

See, I was also going to talk about the issue of Net Neutrality. For those who aren’t familiar with it, it seems as if communications giants like AT&T, Comcast, Verizon, and others who provide internet access would very much like to limit that internet access. For example they’re touting a kind of pay-to play tax on website operators (think about it, writers....unless you fork over the dough, your website might languish in some sluggish back alley of the net that takes forever to load and crashes easily.) They’re also thinking about a tiered system for which internet users, like you and me, would pay. Kind of like cable TV. They have to make money somehow, don’t they? It’s the American way.

A bill that would start the process was – thankfully – defeated in Congress last year, but rest assured the battle over what really does constitute First Amendment rights on the internet has just begun. (Btw, for more information, click here.)

At any rate, that’s not what this blog is about. In my research, I came across a group called “Hands Off the Internet.”

Now.. if you came across an organization with that name while researching internet freedom, what would you think? Wouldn’t you think it was an earnest, grass-roots organization? A group who wants to empower everyone with equal access to information? Wouldn’t you assume it was an ally in the fight to keep Big Business off the net?

If you did, you’d be wrong. It turns out Hands off the Internet is funded by the same communications giants I mentioned above. In fact, under the guise anti-government regulation, this group is actually PROMOTING the very same initiatives mentioned above. 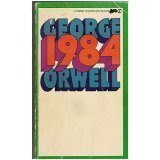 As someone who tries to choose words carefully, and often anguishes over the right one, I am personally and professionally offended. Admittedly, we’ve come to expect Newspeak from the Bush Administration. Consider:

“No Child Left Behind...” which has left public education worse than before it started

Touting "democracy" in certain Central American countries: Check out David Corbett's "Blood of Paradise" for an eloquent depiction of the pretense...

“Either you are with us, or you are a terrorist”... do we really need an explanation


But here’s the worst part. One of the co-chairs of Hands Off the Internet is Mike McCurry, President Clinton’s former press secretary. Clinton. Not Bush.

Can you spell “sell-out?”

Okay, since it's clear that Newspeak is not just the penchant of the current Big Brother – er, Administration, nor is it new to American culture and politics, it's time to take notice. If only to warn each other how easy it is to dissemble.

So, dear blog readers, give me your Newspeak-isms. What pearls of twisted, mangled language can you offer up to further confuse the issues? To show hypocrisy, if not outright deception?

Things haven't changed much since Sinon convinced the Trojans that the Horse would bring them luck.

Libby;
the new book, Stuff To Die For, launched Saturday. But the book coming out in February, St. Bart Breakdown, has a character named Libby Hellman. I know that because I just got the first pass...and sure enough, there's the name. I think she's already dead by the time she's mentioned and there's nothing bad enough for you to take legal action. I think.
Anyway, I'll try to get you a copy of the arc when it comes out later this month. That is, if you're still alive.
DB

Libby, what an important post. And so INFURIATING!! As for my favorite newspeak, I hardly know where to start, although it's hard to beat that golden oldie, we had to destroy My Lai in order to save it. I am really sad that the Sloganator Memorial came down--I used to play it when I was feeling exceptionally blue.

Anyway, time to gird up our loins and start another action campaign.

Weapons of mass destruction aka WMD. Those three words gave a privileged few the excuse to affect the lives of so many.

Of course, the Patriot Act! Thanks, Barbara. You're right, Michael. Don.. it won't really be me if Hellmann is spelled with one "n.":)

Sara, infuriating is the least of it. btw, what kind of action campaign are you thinking of?

You're right Maryann... WMD turned out to be a few rusty canisters of stuff that didn't work... and yet look how they've warped our foreign policy for the past 6 years....

Just had to add this one after reading about the nuclear warheads flown across the mid-section of the country last week. Seems no one knew they were inside the pods, but..."The public was never in any danger." Somehow that doesn't reassure me.

This just in - The DoJ has told the FCC that we don't need no stinkin' net neutrality. Apparently if their friends at AT&T can't charge more, they can't invest that money to develop the Internet and that would be bad for us consumers. All those other people who contribute to the Internet? Ah, they're just a bunch of troublemakers.

That makes me furious!