Violence: To Everything there is a Time?

I saw the film Eastern Promises, a dark story about the Russian mob, the other day. It was excellent... excellent but violent. There were several scenes of graphic violence, usually involving fighting, blood, and guns. While the first instance made me flinch, by the end of the film I was taking it all in without even a grimace. Which made me start thinking about violence and how I view it.

I used to criticize the depiction of graphic violence for all the reasons you’re supposed to: It’s sensationalist. It’s a wretched role model for kids. It’s a simplistic, cruel resolution to conflict. It wreaks unnecessary destruction and damage. Like most of us, I bought into the moral constraints. Konrad Lorenz might remind us of our animal instincts, but surely, as civilized beings, we could understand the price of violence and tame those primate brain stems.

Recently, though, I’m not so sure. It’s not just all the violence we see around us. Or the excuses (religious, protective or whatever) that some members of our society use to perpetrate it. The problem is that it’s getting personal.

I write crime fiction, and violence is a major plot driver. It’s hard to imagine a crime fiction story in which the protagonist does not face specific violence or the threat of it. My protagonists have had to learn to use knives, guns, and their fists to protect themselves. It doesn’t matter what their moral code is. It doesn’t matter whether they have an aversion to blood or guts or bruises. They either learn to use violence to their advantage or they don’t survive.

Some of that attitude has washed over me. A year ago I wrote a blog about shooting– I go to the target range occasionally – and I love it. I find it an incredibly empowering experience. I’m probably going to apply for a FOID card. I’ve also learned a little about knives and have found a knife – the Hideaway – that I’m considering buying.

Which raises an interesting issue: let’s assume that we can strip away all the moral strictures and guilt surrounding violence. All the “shouldn’ts” and “wouldn’ts.” Who among us wouldn’t want to blow someone away if they ticked you off badly enough? If you knew there would be no consequences, would you refrain from using violence against another person?

Or what about a situation in which someone’s coming at you with a weapon and you don’t know if they’re friend or foe? If you had only an instant to decide, would you
shoot first and ask questions later? I think I would.

My friend, Zoe Sharp, who’s been staying with me during her U.S. tour for Second Shot 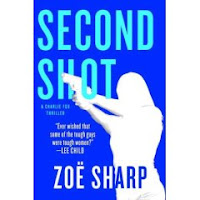 (a great book btw) says there’s a difference between graphic violence and gratuitous violence. I’m not so sure. Once you cross the line, once you accept violence as an acceptable method of conflict resolution, where do you stop?

I’m not sure where I am on that line. All I know is that I’m not disturbed by violence like I used to be.

And that disturbs me.

PS... On a lighter note, click here to see a music video for CHICAGO BLUES.
Posted by Libby Hellmann at 11:32 AM

I have to agree with Zoe. I think violence should be graphic, up to a point. People need to know it hurts, and has consequences. Gratuitous violence goes beyond what is necessary to make that point, either in its frequence, or in how graphic it becomes.

Konrad Lorenz’s point was that, unlike other predatory species, humans don’t have instincts that protect us from our own, intraspecific aggression. He insisted that we have to accept that fact and learn to curb our murderous instincts. Unfortunately, we can also learn to be more violent.

Last night’s news played an interview with a fan of the latest mow-'em-down video game—“I just kill ‘em all” or something to that effect. I suspect that, like the kid in Paducah, Kentucky, that fan would be quite deadly with a real gun in his hands.

"People need to know it hurts, and has consequences."
I believe this. But, in today's society of X-360 and movies in which the good guy wins by blowing away the bad guys, we're de-sensitized. There is no horror at pools of blood leaking from a victim's head on the late news because we've seen something like it on CSI or Cold Case or NCIS. The media has turned violence into entertainment to some extent, so we don't cringe as we once might have. Would I kill someone threatening me? I'd give it a damn good try, but I know what I'm capable of and fear that capability, so there's no certainty unless I'm in the situation. If we take a peek at the world today, the one obvious thing is that violence begets more violence. I'd rather keep it between the pages of a book and let my imagination supply the graphics. A few well-chosen words can scare the hell out of me.
Good words,Libby. You got my brain moving today.

Violence in art and entertainment provides an important safety valve in our society. My craving to pop the driver next to me has often be satisfied by seeing the bad guy really get his in the movies.

The reason gratutious violence has such little affect is that there is no deeper meaning or emotion attached to it. I'd rather see a character I hate get punched, then a 1,000 nameless warriors get gutted on the battle field. Anyway - haven't given this entry to much thought.

Keep up the good work, Libby and keep that Chicago Blues party date in front of us so it doesn't sneak by.

The violence of beast on beast is read
As natural law, but upright man
Seeks his divinity by inflicting pain.

It's a theme in my work, and I'm still trying to fully understand this quotes import.

i remember watching the movie seabiscut next to a pre-teen girl and her dad. i was startled when she watched people on people violence, guns and bombs, during the previews without any reaction and then verbally responded when seabiscut is beaten in the movie. kids are becoming immune to shoot 'em up violence. to what result?

This is a subject that we could probably discuss for a month and still not exhaust all the issues. Home Office... where do you draw the line between graphic and gratuitous.. or is it something you just know when you see it. There was one act in EASTERN PROMISES that we thought was gratuitous.. if you see the movie, I bet you'd know which one.

MaryAnn, I agree that we've all been desensitized... certainly I have. And Michael, you're right, too.. violence IS perceived as more acceptable these days. I'm guilty of it.

Bob.. I haven't felt the satisfaction of violence by proxy, but it's a provocative idea...does that mean it's okay to gorge on violent scenes?

Mark, that quotation is truly chilling...Lurkermom: Unfortunately, I fear we're raising a generation of callous souls who blow each other away and turn college campuses into shooting galleries. Kind of like a modern day Lord of The Flies .. except the adults are right there with them, just as glassy-eyed and desensitized.

Libby, harking back to your earlier post on "Net Neutrality," The New York Times reported on September 27 (today) that they would not allow the National Abortion Rights Action League to use Verizon phones for text messges to their members, because NARAL offers "unsavory" content. I could rant about this from a lot of different angles, but the net result is bone chilling.

That previous comment isn't anonymous, but for some reason my computer jumped to post it before I signed it--Sara

Libby’s entry about violence was very thought provoking and got me all confused about my own feelings on the subject. I tend to be a bleeding heart liberal who thinks Gandhi got most stuff right but I still love a good story with lots of scary violence in it.

I can’t agree with the comments that suggest that violence in fiction or video games or movies encourages violence in real life. I don’t think people who read the Bible are more likely to go out and crucify people or commit random acts of sodomy than their illiterate neighbors. Grimm’s fairy tales have some wonderfully violent acts but most children don’t grow up to model themselves on characters from Tarantino’s Pulp Fiction.

Guns? I think we tend to over-prepare for statistically unlikely events. I live in a leafy suburban neighborhood where my neighbors obsess about their security systems. Some of them have guns but I’m afraid they might end up shooting some 15 year old who tries to sneak into their house to steal a can of beer. Most shootings involve close friends or relatives.

In the hours after 9/11 my biggest fear was that we would drop nuclear bombs on the Afghan/Pakistan border. We settled for just dropping cluster bombs on Afghan peasant villages, maiming lots of small children, and that seemed to satisfy the public’s lust for violent revenge.

For now I’ll just try to avoid encountering Ms. Hellmann and her Hideaway in a dark alley.

I think graphic violence has its place. The movie Saving Private Ryan, for example, is filled with violence from end to end - but these scenes never lose their power to disturb. They disturb me, anyway.

LNWVdS Your blog is great. Articles is interesting!

actually, that's brilliant. Thank you. I'm going to pass that on to a couple of people.