It’s Like Pulling When You Ought To Be Shoving 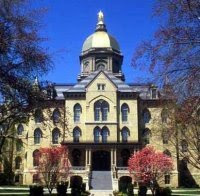 When I was an undergrad at Notre Dame there was a student newspaper with a liberal bent called Common Sense. They agitated on a number of topics, but this was the late 80s and the dominant issue of the time was apartheid. The Reagan and Thatcher administrations advocated something called "constructive engagement," in which western companies could still make profits in South Africa while they waited for the eventual collapse of the apartheid regime. Liberals, on the other hand, were in favor of sanctions and boycotts to hurry things along. There was a communist bogeyman at the center of it all. It's pretty much exactly the same argument we're having currently over Cuba, except now the conservatives want sanctions and the liberals want engagement.

Anyway, Common Sense was printed overnight and early on Wednesday mornings student volunteers would distribute stacks of the paper to the dining halls and the student center and the library so kids could pick up a copy on the way to class if they wished.

Then one day, the papers started vanishing.

By the time students woke up and emerged bleary-eyed from the dorms, every single copy of Common Sense had disappeared from campus. The next week it happened again. It happened the week after that.

Many students saw a conspiracy. The Chairman of the Board of Trustees was an executive at Coca-Cola and Coke did big business in South Africa, so it was easy for some to believe that the University might be directing the mysterious thefts at the order of a powerful alumnus. Then some genius Nancy Drew decided to just stake out one of the stacks and catch the guy red-handed. Turned out it wasn't the University or Coca-Cola. It was Ken. Ken was a weird guy who lived in my dorm. At some point an ultra-conservative Catholic group called Opus Dei had recruited Ken to join them.

These days, a coalition of conservative political groups and self-appointed religious watchdogs--most of which have nothing at all to do with Notre Dame--have been trying without success to get the university to rescind its invitation of Barack Obama to speak at commencement, allegedly because of Obama's position that abortion should be "legal but rare." (I encourage everyone to read Eric Zorn's thorough debunking of Obama's alleged "infanticide vote" in the Illinois senate.) Confirmed nutbag Alan Keyes (whom, not coincidentally, Obama destroyed in the 2004 election for US Senate) was arrested on campus last week while pushing a stroller with a fake baby covered in fake blood. He and others will be protesting this weekend, and you'll see it all over the news. Ordinarily I'd hardly pay any attention. Jimmy Carter, Ronald Reagan, and both George Bushes have given commencement addresses at Notre Dame and there were protesters at every one. My commencement address was given by Bill Cosby and there was even a last-minute improvised protest by African-American students against him.

Notre Dame has had all kinds of commencement speakers from Eugene McCarthy and Andrew Young to Condoleezza Rice and William F. Buckley; from Tom Brokaw to Vernon Jordan; from J. Edgar Hoover to Earl Warren; from Henry Cabot Lodge to Pierre Trudeau to Kofi Annan. Before Barack Obama, nobody has ever suggested there needed to be a litmus test of a person's beliefs before they could speak on campus. (As for the suggestion that it is the honorary degree to which they object, not the address itself, that's a distinction without a difference. Every Notre Dame commencement speaker since 1909 has received an honorary degree. For Notre Dame to have given one to Erma Bombeck and the editor of Commonweal magazine but not to the first black president in US history--one whom a majority of Catholics supported, by the way--would be absurd in the extreme.)
I doubt half the faculty could pass the ideological fitness test now being demanded of Barack Obama--according to the Trib the university needed a lottery this year to determine which professors would get tickets. As for the actual students you will probably be able to count the seniors who will skip the ceremony on your fingers and half your toes. And speaking of the graduates, if we require recipients of honorary degrees to conform to a specific political ideology, wouldn't we need to require the same from recipients of actual degrees?

If you disagree with somebody of something, and you want to protest him or it, that's terrific. Have at it. If you have an issue with Barack Obama, whether it's his actual position on abortion or his stance on the torture photos, by all means put on some comfortable shoes and make your voice heard. But I've seen opportunistic outsiders try to step into the Notre Dame spotlight before, so understand the three basic kinds of people who will be protesting this weekend. There will be a few individuals who are more concerned about the legality of abortion than they are with its frequency, who believe life issues begin and end with terminated pregnancies and have nothing to do with war, the death penalty, health care, or torture. There will be some frustrated social conservatives who want to use Notre Dame's high profile as a fulcrum to leverage their distaste for the president. But mostly there will be guys like Ken who don't think a president they don't like should be allowed to speak on campus at all. These people don't want Catholic universities to be cultivators of critical thought, they want them to be instruments of propaganda. And if you ask them they'll even admit it. (With regard to Pat Buchanan's breathless assertion in that video that he has the names of ten Holy Cross priests who are opposed to the president's visit, I have news for Pat Buchanan: There is a gigantic priest retirement home right in the middle of campus. I could walk in there this afternoon and find ten Holy Cross priests who think Cloverfield is not a movie.)

Notre Dame is a place I love dearly. But the fictional biosphere of unchallenged doctrine that Alan Keyes and Pat Buchanan and sadly Cardinal George would like it to be is not a place I ever would have attended. Not in a million years.

At its core this manufactured hoop-dee-doo isn't really about morality and the Catholic church. It's not even about abortion. It's about intellectual rigor and the free exchange of ideas on the campus of a prominent American university. It is our obligation to call bullshit when people attempt to use their right to speak freely in order to restrict others from doing the same, especially when it happens inside college gates.

In an eloquent letter to this year's graduates, Notre Dame president Father John Jenkins quoted an earlier ND president, Father Hesburgh, who had described Notre Dame as both a "lighthouse and a crossroads," a place where issues of ethics and morality could be illuminated, but also a "crossroads through which pass people of many different perspectives, backgrounds, faiths, and cultures."

He also said this to the graduating students: "You have discussed this issue with each other while being observed, interviewed, and evaluated by people who are interested in this story. You engaged each other with passion, intelligence and respect. And I saw no sign that your differences led to division. You inspire me. We need the wider society to be more like you; it is good that we are sending you into that world on Sunday."

Well, amen to that.

Nicely done, Kevin. I keep hoping this entire spectacle is just another indication that blind adherence to doctrine is in its death-throes.

Zealots, even those who profess to love democracy, don't favor any free speech other than their own. But what is even more insidious here is that the zealots aren't just satisfied with suppressing free speech on an issue that they disagree with - I highly doubt that Obama was coming to South Bend to explicitly state his views on abortion - but want to stifle anyone who thinks differently than they do and who has the mere POTENTIAL for expressing a contrary opinion.

Well said. It seems like there's now a vocal enough backlash against the backlash that we domers aren't coming across as total religious zealots.

and you make a great point here:
"But mostly there will be guys like Ken who don't think a president they don't like should be allowed to speak on campus at all."
in that virtually none of the past speakers have been in full agreement with Catholic doctrine. I'm also glad that Father Hesburgh spoke in support of the decison to invite Obama.

Here are some well-crafted and heartfelt words from a graduating Notre Dame student.

Kevin, thanks for your extremely well-put thoughts on this topic.

Thanks for this, Kevin. I edited Common Sense for, oh, about three years, and the fact is that the loons never stopped dumping our paper in the garbage. Fortunately, like the commencement protesters today, these people are the outliers.

That was a great speech. And as it turns out the majority of people approved: http://www.newsy.com/videos/commencement_controversy/

I think protesters should stay out of a graduation ceremony. Press conference or something in the political realm,maybe.

When Pres Bush spoke at the Univ of Ohio commencement, students who wanted to protest his appearance because of the war in Iraq were told they would forfeit their degrees, so Notre Dame was way ahead of the secular world on this one