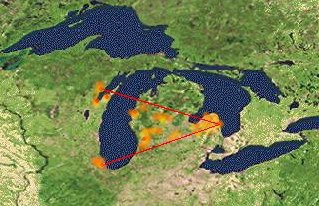 October 8, 1871,was the end of a hot, dry summer and fall in the Midwest. Two hundred miles north of Chicago in Peshtigo, Wisconsin, farms were being battened down, wood stacked for heating, livestock herded into barns. At nine-thirty in the evening most hardworking farmers were probably in bed, when a firestorm came out of nowhere. In "Firestorm at Peshtigo", William Barnes describes it as “…nature’s nuclear explosion. Here’s a wall of flame, a mile high, five miles wide, traveling at 90 to 100 miles an hour, hotter than a crematorium, turning sand to glass.” When it was over, a million and half acres had been burned, an area twice as big as Rhode Island, and 1,200 to 2,500 people had died. The area was rural; the actual death count has never been known. But the immense Peshtigo Fire is largely forgotten, because that same evening was another fire—

Chicago. The fire burned for two days and the area was too hot to enter for a week. The conflagration was made fiercer by the use of wood in building and by the storage of wood for heating and cooking near houses. Destroyed were over four square miles, virtually all of the city center, the opera house, churches, hospitals, and theaters. An estimated two to three hundred people died. Famously, the fire was blamed on Mrs. O’Leary’s cow kicking over a kerosene lantern.
A reporter for the Chicago Republican, Michael Ahern, admitted in 1893 that he had made the cow story up because he thought it would be colorful copy.

Growing up, I spent a lot of time in Holland, Michigan, across the lake from Chicago and fifty miles farther north. I was told of the fire that destroyed Holland on the same night as the Great Chicago Fire. People said it had been caused by burning sparks from the Chicago fire, but I couldn’t imagine how they would stay hot traveling a hundred miles over Lake Michigan.

About ten years ago I visited a library at Manistee, a hundred miles north of Holland, but like Holland, on the east coast of Lake Michigan. A great and mysterious fire had destroyed Manistee the same night

There were fires that night in Grand Rapids, South Haven, Port Huron, Muskegon, Wayland, Big Rapids, Lansing, Saginaw, Sturgeon Bay, and Menominee. A steamship in the lake said that the Manitou Islands were afire. Smaller fires occurred in Ohio, southern Canada, and Minnesota, No cause was ever found for any of them, except poor Mrs. O’Leary’s cow, and that explanation was a fraud.

Blamed were the dry hot summer, wooden dwellings, and leftover waste from timbering work. People said the fact that the fires happened on the same day was coincidence. Just horrible, horrible chance.

It was suggested first in 1882 that the fires had been caused by a meteor shower. Later there was a theory that the tail of the comet Biela was flaming and had set fire to the Midwest. Or maybe pieces of meteorite. But meteorites are not hot enough when they strike the earth to cause such fires.

And comets’ tails are not afire.

The meteor theory was discounted for years, but recently Robert Wood, an aeronautical engineer and physicist who had worked for McDonnell Douglas and Douglas Aircraft, returned to the comet explanation with more up-to-date information.

Not the tail of the comet, but Biela’s Comet itself, which had split in two in 1845 and had been seen to be breaking up in its previous passes near the earth. The body of the comet, Wood says, was likely made up of frozen acetylene, methane, and other combustible gas. Heated by the friction of entry into the earth’s atmosphere and fed by the oxygen in our air, the chunks became enormous balls of fire. Eyewitnesses reported “fire balloons” that came down out of the sky and ignited whole forests. The impact map [above] resembles the conical path of a shotgun blast from the sky.

Biela’s Comet has never been seen again, but parts of it may make up the annual Andromedid meteor shower.

That is fascinating. Thank you. Though it may seem improbable to some, as Sherlock Homes said, once you have removed the impossible, whatveer remains must be the truth, no matter how improbable.

Someone's going to have to come up with a less improbable story than this, which is definitely consistent with the facts. "Coincidence" is not acceptable to dispute this kind of evidence.

I hear the cow's family had to change its name and move to Calgary. A shame.

Thank you for this. Growing up in Chicago, of course I heard the O'Leary tale as a youngster, but only years later did I first hear about the fires Peshtigo and in Michigan. But until just now I had thought the Michigan fire was just a single one, and not the widespread ones you describe. All of those fires occurring on the same night across such a vast range couldn't have been coincidence. The comet explanation certainly makes sense.

What a fascinating theory, Barb! Thanks for sharing. Anyone besides me trying to figure out how to use it in a book? Now you know the answer to "Where do you get your ideas?"

Thanks Dana, Pete, and Libby. I was surprised, too, at the sheer number of fires. And Libby, there's a book in there someplace.

Fascinating. I grew up in Chicago, new all about the fire and Mrs. O'Leary's falsely accused cow, but never heard a word about the other fires. And I had a good friend whose family had a home in Holland.

Hello to all, this is my 3 victory message. I establish your orientation sooner than link [url=http://viagras.ru/page.php?rbase=theoutfitcollective.blogspot.com]48 catalog[/url] . Humour don't be indignant on newbie epheds!

Good Day!!! theoutfitcollective.blogspot.com is one of the best resourceful websites of its kind. I enjoy reading it every day. All the best.