Fragments of the past

Not long after I put up a web site to promote my book I received an email from a woman in the western suburbs who introduced herself and said she knew my family from the little farming community Downstate where my parents grew up. Because of the size and remoteness of Stark County, Illinois, and the decades that had intervened, the connection through my book was a delightful surprise.

Then last weekend, just before my book signing and discussion was about to begin at Centuries and Sleuths, the great mystery book store in Forest Park, in walked the woman, whose name is Julann, and her husband. I signed a couple of books for her and she apologized that she couldn’t stay because she had to run her husband to the airport. But before Julann left she handed me an envelope of 60-year-old photographs and a letter.

My head was supposed to be on the coming discussion about crime and corruption in Chicago, but suddenly I was transported to a post-WWII world of farmhouse dinners and big band dances. The photographs were of my parents—my late father and 85-year-old mother--as a young couple. Some of them were wedding photos I’d seen before, but some were images that were completely new to me, including a shot of my father carrying my mom around on his shoulders on a sunny day. And then there was the letter--on blue stationary, in my mother’s distinctively formal slant.

Dated 1946, it was from my mother to Julann’s mother just after her wedding. My mom was 22 at the time and had been a bridesmaid in the wedding. There was nothing extraordinary in the four pages other than some minor-league intrigue over the attentions of two young men apparently trying to ace my old man out of the picture. Nonetheless the letter offered the wonderment of discovery. A glimpse of my mother’s thoughts as a young, single woman. This was a person whom I and my five siblings never knew, and here was a document of who she was and how she thought, a record beyond the faded and malleable recollections of later life.

A few days after this happened, my wife and I were talking about the letter and she said, a little wistfully, “That will never happen again.”

A handwritten letter, forgotten for 60 years in a shoebox or drawer somewhere, landing in a someone’s lap and revealing some little sliver of the distant past. She’s probably right. Nobody sends letters anymore. We send emails and they get deleted, or merely lost in our own vast digital clutter. But who knows, maybe 60 years from now our grandchildren will stumble on some dusty and scratched little flash drive—the one plugged into this computer right now. Maybe they’ll find a machine that can read such outdated technology. And maybe there will be a few random missives from the old folks sitting there waiting for them.

A couple of weeks ago I told a story about my brief time in Haiti several years ago, and that in the wake of the earthquake I wondered what had become of the Hospice St. Joseph, the mission where I stayed when I was there. After a few emails I learned last week that the nuns who run the mission and their lodgers survived by fleeing to their large courtyard, but the building itself collapsed. Many of their staff, who live in the surrounding Christ Roi neighborhood, lost family members in the disaster. It’s hard for me to fathom the collapse of that sturdy old building, and it saddens me that this is relatively good news. 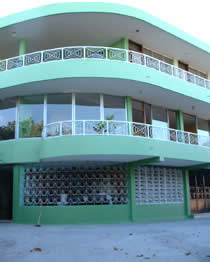 One last thing. I was thrilled by Kevin’s post Friday about the discovery of correspondence between Walker Percy and Bruce Springsteen. I became obsessed with Percy in college and in a weird way he paved my path in life. Or at least pointed me in this direction. The Moviegoer was assigned in an introduction to American civilization class I took as a freshman. I figured any field that would teach this book as a primer on our own civilization was probably where I belonged, and I became an American civilization major. In the American Studies department I fell under the spell of two professors. One was an English and creative writing teacher who finally cracked my knucklehead open to receive literature, and planted the seed that I might myself write something worth reading. The other was an historian of social reform movements who once slyly told me I should read detective novels because they had all the relevant social consciousness that highbrow literature too often lacked. Twenty years later and here I am, still turning this nugget from The Moviegoer over in my head:

Thank you, Dr. Percy. And thank you, Kevin.
Posted by David Heinzmann at 7:54 AM

Great post, Dave. I sense a lot of wistfulness on your part. Must be the season...

What a beautiful story. I wish something like that would happen to me.

Thank you for this.

Thanks. Libby, I'm trying to be forward looking and upbeat. I really am...

What a gift! I love the peek into family history. Gives a sense of meaning to things, doesn't it? Definitely clarifies the present.