Pardon Me While I Rant

Are we all done with Valentine's Day? OK. For those of you who don’t like political blogs, just scroll on by, because I need to vent. It’s been over 6 months since I’ve written on politics, so I’m due. And it's President's Day anyway, which seems appropriate.

As many of you know, I grew up in Washington DC, where, when you were gossiping about the neighbors at the dinner table, you were essentially talking politics. I came from a “mixed marriage:” my late father and brother were Republicans -- my father even shared the same birthday as Richard Nixon -- and my sister and I were liberals. My mother didn’t declare until my father passed away. She turned out to be decidedly liberal.

Liberal or conservative, however, we were always expected to present our opinions based on fact. I can’t count the times I was told, “But, Elizabeth, where are your facts?” In my father's view, opinions were just hot air unless you could support them objectively. So I learned at an early age how to build a cogent argument.

Over time I began to see how facts could be manipulated. I might have even done it myself a time or two. But I could deal with it. Consider the source. Study the methodology. Analyze the implications. Understand that people often exaggerate. Still, there was usually a kernel of truth – or facts – embedded in political manipulations and exaggerations.

Not any more. Fueled by 24-hour news cycles, cable networks, and blogs, those tiny kernels of truth have disappeared. Politicians are out and out lying. 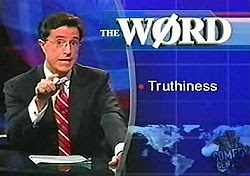 Whether it’s in the pursuit of “truthiness,” re-election, or just obstructionism, the lies are blatant. And when they’re called out, neither the liar nor the listener does anything about it. In fact, it’s almost seems like lying is a badge of honor. The shamelessness makes my stomach twist.

There’s John Boehner claiming health care is dead because they don’t have 4 key Republican principles in the bill. Except all four are in the bill. There’s Sean Hannity chortling over the blizzards and belittling climate change and Al Gore. There are those who feel the US criminal justice system isn’t good enough to try terrorists, even though over 300 terrorists were prosecuted in criminal courts during the Bush years. There are the politicians who voted against the stimulus package then posed for photos with giant-sized stimulus checks in their home districts.

And let’s not even discuss Sarah Palin.

To be fair, Obama has waffled on the public option, executive pay, clean coal, and hiring lobbyists. And getting Democrats to agree on most issues is like herding cats. To his credit, though, Obama seems willing (maybe a little too willing for liberals) to move to the center. Still, neither side is ready to play nice. The two parties are so intent on “winning” or “obstructing” that nothing gets done. Congress is in a stalemate. At a time when our economy and our position in the world is so fragile, it’s unconscionable.

A lot of that impasse is due to the Senate filibuster, the ability of the minority party to basically kill bills they don’t like by demanding cloture. Cloture requires a vote of 60 in order to stop debate on a bill (the actual filibuster part) and vote on it. If they can’t get 60 Senators to vote to vote, the bill withers away.

Yes, Democrats used the filibuster to block Bush legislation. But they’re pikers compared to Republicans, who have used cloture, or the threat of it, nearly 140 times in the first year of Obama's presidency. And then claimed he was weak because he couldn’t overcome it. The Founding Fathers never intended the filibuster to be used this way (there’s are some interesting pieces on it here, here, and here) but it is, and it’s paralyzing Congress.

Some in Congress are beginning to realize the monster they’ve created, but mustering 60 votes to change the filibuster rule is, of course, going to be problematic. Especially since they'll need 60 votes to do it.

So while both parties are arguing, blaming each other, or playing the populist victim card, the opportunity to tackle the tough issues evaporates into the vapor. (I’m still confused why Harry Reid torpedoed a bipartisan effort to draft a jobs bill).

Meanwhile, a recent New York Times poll reports only 8 % of voters think their Congressmen are worthy of being re-elected. Hey guys, are you listening? A pox on both your houses.

PS Back to crime fiction for a moment... if you’re a Kindle person, the prices of 2 of my novels, EASY INNOCENCE and DOUBLEBACK have been reduced. Smashwords too. Check them out.
Posted by Libby Hellmann at 7:00 PM

I'm a liberal myself; I think "progressive" is a term thought up by those afraid to call themselves liberal when it was "the L Word."

I agree with everything in here, but would go farther. I am amazed and disappointed that anyone with any exposure to Chicago politics could be so lousy a politician as Obama. Not campaigner; politician. He negotiates away his positions of strength, such as positioning recess appointments as extraordinary events he'd rather not use; ALL presidents have used them. They're not unusual at all. Now that he's said they are, the Republicans will be free to beat him with that comment the next time they're holding up another hundred nominations. (The President is taking an admittedly extraordinary step here without due cause.)

The "leaders" in Congress are no better. The reconciliation process was designed for exactly the situation health insurance reform is in now: the budget resolution for reform doesn't match the House's version, and, as such, needs to be reconciled with the passed resolution. Democrats act like it's never been done before and they need permission from Mom to do it.

We seem to have elected an entire government of liars, hypocrites, and cowards. Party is no differentiator on those fronts.

Sorry. That was too long for a comment. I should have made that a blog post of my own.

You said it better than I did. Thanks, Dana.

The funny thing is, Libby, those people who say their rep or senator isn't worthy to serve will go right out and vote for her or him in November. Nice piece.

Forgive me if I'm being obtuse, Libby, but...

Haven't politicians been lying to us for decades?

I see nothing new in this day and age other than we have so much more exposure to their lies because of the 24 hr "news" networks. Please take note of the quotes.

When everyone was dancing in the streets to Will I Am's Obama video, and proclaiming him the second coming, I researched him and found... a politician.

I'm not knocking him, I'm just using him as an example because he's the most recent one.

Presidents, senators, congressmen, representatives, and on down the line to the state and local level, it's all the same and has been for over a century.

I believe the bigger issue in our society is due to the 24 hr coverage, and now the almighty Internet with its pantheon of bloggers and tweeters and Facebookers, et al. We have stopped relying on ourselves, on doing our own legwork for knowledge and information.

We read blogs and watch talking heads, and then make up our minds and form our opinions based on other people's opinions regardless of how well-informed they are or are not. In fact, rarely do we even take the time to found out if some story on MSNBC or Huffington or Fox News is actually being reported without accurately or without some sort of filter.

Having access to everything with just a click of the mouse or a click of the remote has not made us smarter and more informed and closer as people claim.

It has made us lazy.

You raise some good points, Paul, and I think you're right about the so called cable "news" outlets and saturation coverage, which turns out to be thinly veiled (or not at all) screeds from one side or the other.

But I'm not sure we are lazier than before... what frightens me is the declining number of media who (despite their corporate ownerships) were perceives as being objective. We don't have that equanimity in the media now, which means EVERYTHING we see or hear or read is filtered through some political lens. Which adds fuel to the fire and makes the current situation even more intractable.

In some ways, the Chinese have it all over us. They don't even pretend to honor the press or public opinion, and look what they've been able to do with their economy. They are moving ahead much more quickly than we are. It's scary.

The news stopped being news in this country when the ratings for the Gulf War coverage starting beating other content.

There is zero objective U.S. news reporting, in my opinion. Be it TV, Internet, or print.

That's why I think it's so critical for us to stop forming our opinions based on blogs and videos and newscasts.

Yes, it is phenomenally easier to click on Huffington or Fox News, than it is to actually look up government records.

But nearly everything our governments do is on record, and it only takes a little effort to read what actually is being said and done, as opposed to reading interpretations of it.

I spent just over an hour surfing the Illinois government records when I wanted to learn about Obama and his actions as a politician. Most of what I read has, to this day, never been reported or discussed on public airwaves.

News is dead. Journalism is on life-support.

We have to take responsibility for ourselves and our opinions, especially if we're going to discuss them in public.

Anonymous said...
This comment has been removed by a blog administrator.
6:51 AM

libby, thanks for speaking up and out for many, including me. the most worrying part of this, aside from the outrageous behavior of the congressional republicans, is the decimation of investigative journalism. for over a decade, newsrooms slashed their reporting staff--every time you cut half the reporters, the share price doubled. Real journalism--not Hannity or Huffington--has always been the safeguard of the republic, and it's close to extinct. i don't know how we solve that problem--but it's one that we must solve if we're going to survive as a true republic, not an oligarchy. i'm reading Hillary Mantel's wolf hall now--brilliant, impeccably researched--and it's quite thought-provoking on the nature of politics and manipulation of public opionion.

Sara, Im not at all sanguine that we WILL survive as a republic. WIth the recent Supreme Court decision on corporate campaign financing, haven't we just opened the Gates of Oligarchy Hell?

I've been enjoying, the book"Game Change" and it has been useful in maintaining perspective during the current malaise.

This comment from Hillary Clinton seems particularly relevant. During the primary debate in New Hampshire, Hillary said, "....what we need is somebody who can deliver change. And we don't need to be raising the false hopes of our country about what can be delivered."